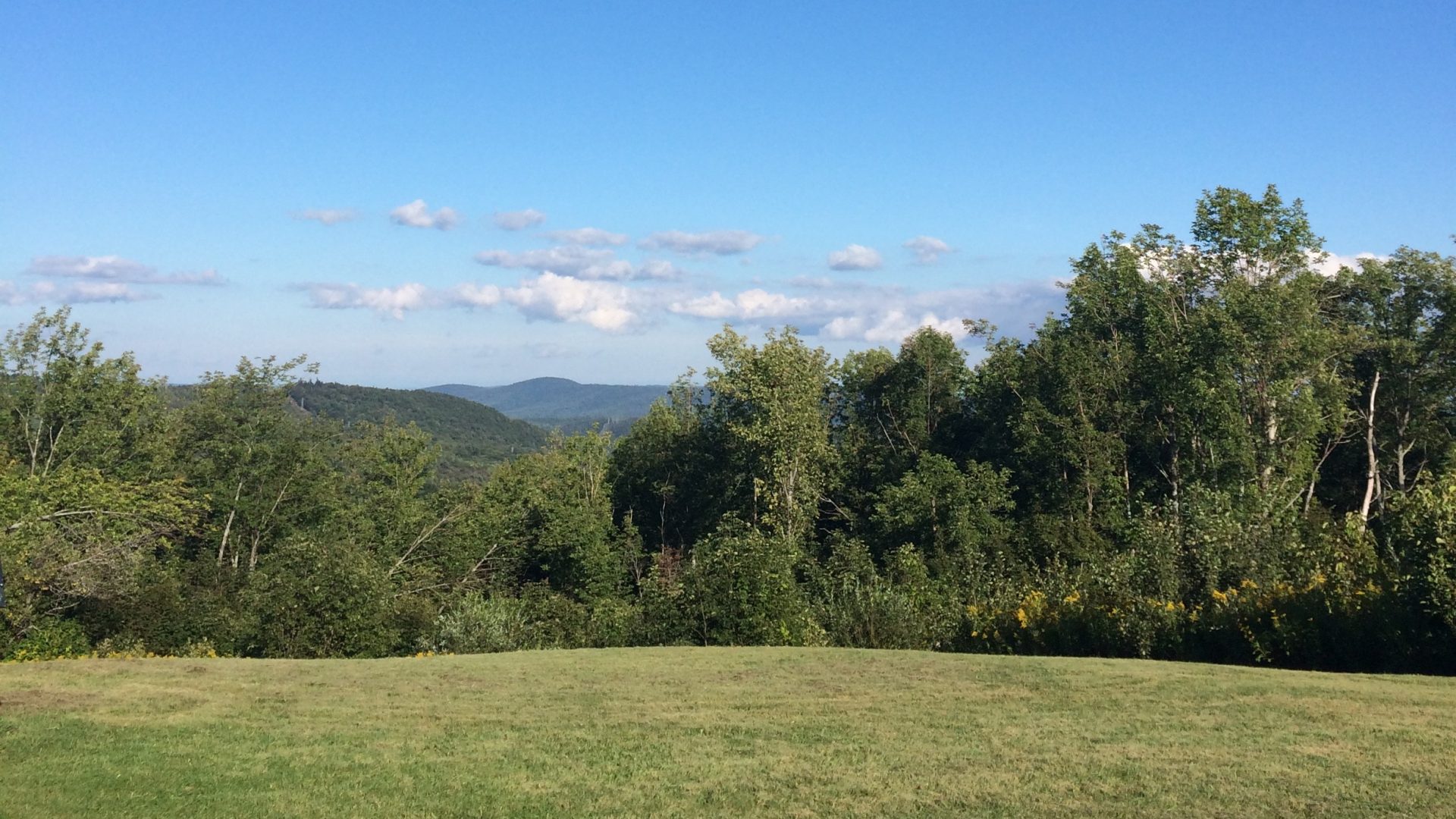 It was cold and raining heavily during the day and  night of October 9, 1777, as what was left of Burgoyne’s battered army retreated  north along the west bank of the Hudson River.  The road was nothing but mud, and wading through it was so miserable that the drenched soldiers began dropping their baggage and abandoning wagons, even killing the horses so as not to leave them for the Americans. To make matters worse, the American army now in pursuit was attempting to pass the British and take a position where it could block the latter’s passage north.  There was harassment from every side as the British tried to find a safe place where they might cross  the river  and hopefully escape to Fort Edward.  By October 12, Burgoyne had reached the original village of Saratoga where he decided to dig in just above Fish Creek (marked as 1 in the map above) and send scouts north to probe the nearest fording place. To his dismay, the report came back that American General John Stark with a thousand of his New Hampshire/Vermont volunteers had just occupied the only viable crossing a mile above  where the Battenkill joins the Hudson (2 ).  Burgoyne now realized that he was surrounded on three sides (2 and 3) by an American army that numbered more than double what was left of his.

The next day,  Burgoyne reluctantly decided to contact General Gates. For the next three days thereafter a de facto truce  was recognized while the two sides exchanged messages regarding the terms of what for all intents and purposes was the surrender of the British army. Burgoyne would not admit to the word, and insisted that what was taking place was a “convention” of understanding and not a capitulation as such. In fact he was hoping to the very last that Clinton might be arriving from New York city to save him, and that victory could still be snatched from the jaws of what was really only a momentary defeat. Finally, on October 16,  his own general officers, all too aware of the pitiful condition of the soldiers (as their unrealistic commander was not) demanded that he accept the generous American terms, considering the impossible plight of of his army. That evening, the surrender was settled and signed.

On the morning of October 17, the remains of Burgoyne’s once magnificent fighting force  began their long trek as prisoners of war to internment camps near Boston  three-hundred miles away. Of  the 10,000  soldiers who had started out from Canada that previous June in such high expectations of glory, only 5, 895 now remained – including 3,018 British regulars, 2,412 Germans , and 465 auxilaries (plus 393 British and German women).  Probably one of their several columns passed through Williamstown on their way to prison, although there is no record. In any case, all were permanently lost to the British war effort thereafter, a catastrophe which might be likened to the Germans’ loss at Stalingrad in WWII.  General Burgoyne was politely invited to dine that evening with General Gates, and then went on to Albany where, in spite of being of the enemy’s side, was again treated with all the respect due his rank and noble caste. Finally, he was returned to England where he received far less gentle treatment: a nasty trial before Parliament and lifelong coolness from former admiring friends and colleagues.

The most important result of the victory at Saratoga was the  boost it gave to the realization of a truly sovereign United States, not just in the heads of the hardy people  in this country, but to the world beyond – especially in France, which had long been considering whether  to invest in the Revolution as an opportunity of getting revenge against England for 1763.  After carefully measuring the consequences of  Burgoyne’s surrender,  the French at last opted to participate officially, declaring war against England in July, 1778, even as French war ships were already  unoffocially privateering off the American coast. In fact,  the British had good reason to worry about the recent French naval build-up. French ships now possessed the capability of harassing the long lines of ocean communication between the far-flung colonies of the expanded British Empire.  Since Saratoga had forced the British to abandon New England (leaving Williamstown and vicinity at last in peace) and concentrate their  attention further south, it was the French navy indeed which finally did them in.  When Washington’s army pressed Lord Cornwallis against the sea at Yorktown, Virginia in 1781, it was the French fleet  which blocked the British retreat and caused their final surrender – the last major battle of the Revolutionary War.

However, the immediate reaction to Saratoga and the French involvement was the British decision to order Howe out of Philadelphia and consolidate his troops with  General Clinton in New York City, the most important seaport on the American seabord which must now be doubly protected from both land and sea attack.[i] Thus  another huge boost to American morale as Philadelphia was once more reclaimed as capital of the aspiring nation, and Congress could return to its original venue in the famous building we now call Independence Hall. In gratitude for Benedict Arnold’s  great contribution to the Saratoga victory, George Washington appointed him military governor of the city. He was now in semi-retirement, limping with a cane while  convalescing from his near-fatal leg injury during the battle.,

Philadelphia in fact, was  the second largest city after London in all the British Empire. Moreover, its lifestyle was by far the most cosmopolitan in North America.  During the British occupation it was the favorite “R & R” retreat for the red-coat brass.  William Penn’s famous grid plan with its four  garden squares lent the city a special grace, and the fine houses which bordered on them were renowned as places of elegant social gatherings. Perhaps the most swank at that time was the home of wealthy Judge Edward Shippen  where General Howe and other high British officials were frequently entertained. Shippen’s beautiful daughter Peggy, only eighteen years old and quite the coquette, was already regarded as the most charming of Philadelphia hostesses and favorite of  the British officers, among whom was young and dashing Major John Andre. Without a break, that same social scene continued when the Americans returned, only now with epiletted blue uniforms replacing red-coats in the courtly minuet, and with the same tafetta gowned ladies whatever their past or present politics.

Into this glitter stepped Benedict Arnold, out of his natural barracks-room element, but utterly captivated by the pomp and spendor of  high society. Taking advantage of the perks of his new office, he purchased  a  large country house, “Mount Pleasant” (still extant in Philadelphia’s Fairmount Park) where he immediately set about to establish himself as a manored aristocrat. Meanwhile, he began to court Peggy Shippen, just turned nineteen.  She was likewise smitten by this rough-hewn wounded war hero nearly twice her age (who was also a widower with three  children).  For some reason his Heathcliff-like disposition enormously attracted her. They married  in 1779 and moved into an elegant city mansion as well as maintaining their country estate at  Mount Pleasant.

The couple entertained lavishly and drove about the city in a luxurious coach complete with liveried footmen. Arnold’s ostentatious wealth aroused both envy and suspicion among fellow municipal administrators. Indeed, there was good reason for suspicion. Allegations of malfeasance were officially brought against him including a letter of reprimand from his mentor George Washington. There was even a court martial. He defended himself  by exaggerating his war wounds and won acquittal out of sentiment on most of the charges. But his bitterness was hardly assuaged. It only exacerbated his vengeful demons and greed for money.

At this point SWCA readers may wonder as to what all this has to do with Williamstown. I admit to having digressed,  but with a purpose. I shall reveal no more about Arnold’s conspiracy since everyone knows  how Arnold was making secret contact with the British; how he conned an appointment to  command the Hudson River fortress at West Point in order to betray it and sell out to the enemy; how his wife was in contact with her old flame Major Andre (and the ever intriguing question as to whether she was a conniving Lady Macbeth, or just a socialite airhead); how Arnold gave the plans of the fort to Andre; how Andre was captured and hanged as a spy, which  exposed Arnold’s  treachery; how Arnold escaped and went to England  but was hardly embraced, and where he  died in bed but lived to regret his treason.[ii] In the new nation which he had so ignominiously abandoned, all mention of him was erased from the war monuments and even his image was expunged from illustrations of the battles which he had helped to win.

I tell all this only to remind readers that what ended so negatively at West Point in 1781, actually began so positively  in Williamstown just six years earlier – that sleepless night he spent in Smedley’s Tavern on the eve of what should have been a career of  everlasting fame (one might even imagine that “Williamstown” was Arnold’s deathbed last word – his “Rosebud”!). However, the real reason for my rehearsal of this unfortunate tale has to do with my next and last installment, an invitation to all SWCA members to take a summer drive through our remarkable  historical countryside, especially to the Saratoga battlefield now a National Historical Park  (less than an hour’s travel time from Williamstown).  Standing alone in a patch of woods right beside the reconstruction of Breymann’s Redoubt is an astonishing stone marker that must be contemplated as the ultimate monument to the vicissitudes of valor.  No name is carved on it, only a relief image of a booted left leg,  the only part of Benedict Arnold’s physical body  worthy of his country’s remembrance.[iii]

[i] In June of 1778, as the British army, now under command of Sir Henry Clinton (Howe having been relieved) marched  back to New York, Washington left Valley Forge and attacked the redcoats at Monmouth, New Jersey. The battle ended in a draw, but the outnumbered American army, having  been disciplined to a new vigor during the previous winter by Prussian drill master, Baron Von Steuben,  proved at Monmouth that it could maul even a larger force of  British regulars. This was also the battle in which several women took up arms along side their men, the most famous of whom was Molly Pitcher.  Monmouth was the last major engagement between the two armies in the northern states. The rest of the war and final victory would take place  in the south.

[iii] During the nineteenth century the following inscription, still nameless,  was added to the monument: “In  memory of the most brilliant soldier of the Continental army, who was desperately wounded on this spot, winning for his countrymen the decisive battle of the American Revolution, and for himself the rank of Major General.”

With the assistance of Andrew B. Crider & Dorothy D. Edgerton